Amino acids (or amino acids) are theprimary structural unit of proteins. We can therefore imagine amino acids as bricks that, joined by a glue called peptide bond, form a long sequence that gives rise to a protein.
In protein synthesis only twenty of the different amino acids that exist in nature (currently over five hundred) are involved. From a nutritional point of view, these amino acids can be divided into two large groups: essential amino acids and non-essential amino acids.

Essential amino acids are defined as those amino acids that the human body is unable to synthesize in sufficient quantity to meet its needs. For the adult there are eight and more precisely: phenylalanine, isoleucine, lysine, leucine, methionine, threonine, tryptophan and valine. During the period of growth, a ninth, histidine, should be added to the eight mentioned above, in consideration of the fact that in this period the demands for this amino acid are higher than the synthesis capacity.

Cysteine and tyrosine are considered semi-essential amino acids, as the body can synthesize them from methionine and phenylalanine.
Are defined conditionally essential amino acids (arginine, glycine, glutamine, proline and taurine) those amino acids that play a key role in maintaining homeostasis and body functions in certain physiological situations. In some pathological conditions these amino acids may not be synthesized at a rate sufficient to meet the real needs of the body.

Arginine is assuming considerable importance as a precursor of nitric oxide because of its many functions in cellular activity, in the transduction of biological signals and in immune defence.

Amino acids and liquid amino acids are the building blocks of proteins that your body uses to build muscle. They are also important for the proper functioning of your body's cells and organs. The main sources of essential amino acids include meat, dairy products and legumes.

Liquid amino acid supplements, then amino acids in liquid form offer a quick and convenient solution to getting your daily amino acid needs while avoiding consuming excessive amounts of calories.

It is no exaggeration to say that amino acids are the foundation of all life on Earth. The molecular building blocks of proteins and amino acids are essential for many basic functions of life and the body.

In addition to their essentiality in assembling proteins for both collagen (an important connective tissue) and muscle tissue, amino acids play a key role in a wide range of bodily functions.

They are required for the production of certain neurotransmitters, as well as enzymes for food digestion and many other biochemical processes including detoxification, production of genetic materials and hormones, and much more.

The amino acids and proteins they make up account for about 75 percent of the dry weight of the human body!

In this section we present the various common amino acids in isolated form.

Composed primarily of carbon, hydrogen, nitrogen and oxygen, amino acids assemble into various sequences to create different proteins. In addition to their essentiality in assembling proteins for both collagen and muscle tissue, amino acids play a key role in a wide range of bodily functions. They are required for the production of certain neurotransmitters, as well as enzymes for food digestion and many other biochemical processes including tissue repair, detoxification, production of genetic material and hormones, and much, much more. The amino acids and proteins they make up account for about 75 percent of the dry weight of the human body.

Despite the almost infinite number of possible variations and over 500 classified amino acids, all organisms on Earth rely on the same 20 amino acids for life. All amino acids begin with a "backbone" consisting of a central carbon atom (C), an amine group (-NH2), a carboxyl group (-COOH), and a hydrogen atom. Any subsequent atoms or groups are called side chains or R-groups. These side chains determine the individual identity of each amino acid. The individual amino acids are then linked into peptides and assembled into various structures to form proteins. 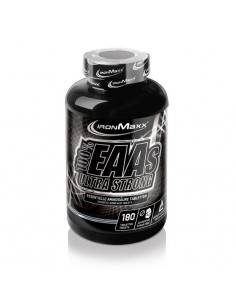 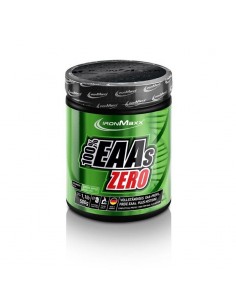 5% Nutrition
Show available variants
€49.50 €55.00
ALL Day You May by 5% Nutrition is a post workout supplement that improves the energy recovery of glycogen and protein synthesis, counteracts the formation of free radicals and promotes the elimination of muscle toxins.
View 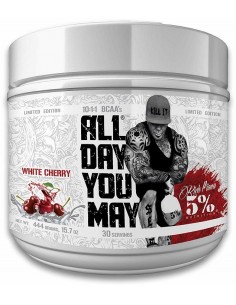 5% Nutrition
Show available variants
€48.10 €74.00
AllDayYouMay Special Edition by 5% Nutrition is an all-in-one supplement based on a powerful combination of ingredients. Created to allow you to feed your body what it needs to recover and grow, all day long, and ready for your next weight bout!
View

NOW Foods
NOW0206
Show available variants
€36.72 €72.00
In contrast to proteins or peptide-bound amino acids, NOW® Amino-9 Essentials™ contains all 9 essential amino acids in their superior free-form state and in the proportions recommended by the National Academy of Sciences to optimize protein synthesis and tissue repair for adults age 19 and over.
View

Universal Nutrition
Show available variants
€19.68 €24.00
Amino 1900 by Universal Nutrition is an essential amino acid pool supplement ideal for maintaining the positive nitrogen balance and as an energy support in the pre-workout.
View

Scitec
Show available variants
€14.90 €21.29
Amino 5600 by Scitec is a full-spectrum amino acid formula - and compared to others - it has all the essential and chain amino acids.
View 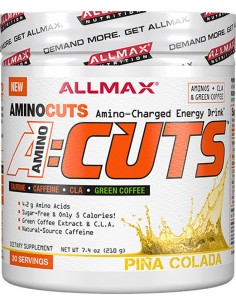