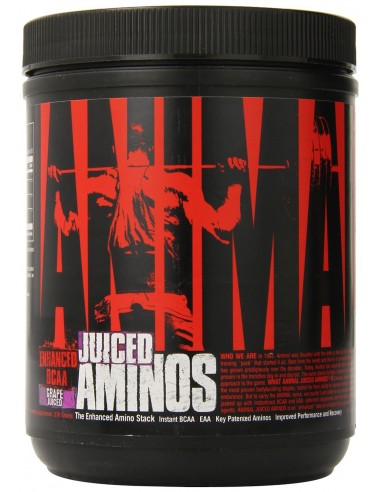 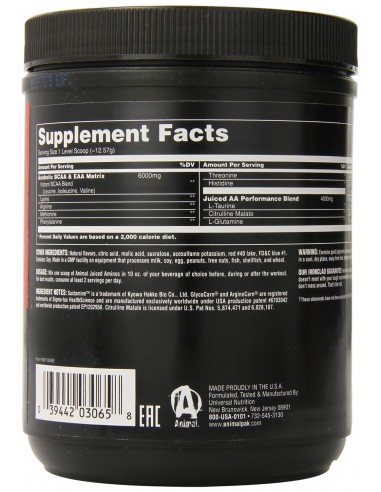 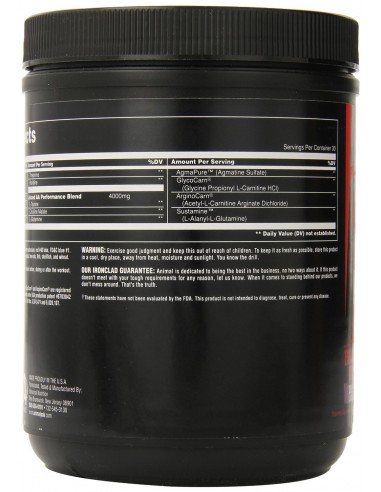 Mix one scoop in 10 oz. of your beverage of choice, at least two times per training day. Best taken in the periods around your training or intra-workout.

At Animal, we believe in the basics. In an industry that sells you a flashy dream, we strive at all times to keep it real. And just like you know the brand new chrome-plated leg extension contraption at your local fitness megaplex will never replace the barbell squat, you know the slick marketing of the latest nutrition fad likely can’t hold a candle to the staples. There’s a reason weightlifting athletes have been supplementing with amino acids for more than half a century. Because they work. The building blocks of protein, the foundational fuel for all muscle tissue growth, there’s nothing more crucial.

That said, if an amino product was going to be Animal, if it were going to garner that trusted stamp of approval, and reach that threshold of no-nonsense excellence, it would need to be serious. Efficacious doses of the most critical anabolic amino acids—BCAAs and EAAs, gassed up by the inclusion of premium, prized, patented complementary amino compounds, delicious, refreshing taste allowing for ease of use… All with no unnecessary fillers or frills. Just the basics, instantized for easy mixing, delivered raw and uncut from the name you’ve trusted since 1983. That’s Animal Juiced Aminos.

The all-new Animal Juiced Aminos is a powerful amino acid stack that is targeted and strategically enhanced for strength training athletes. What does it contain? Each jacked-up scoop of Juiced Aminos is loaded with instantized branch chained amino acids (BCAA), essential amino acids (EAA), in addition to performance and recovery aminos and key patented aminos. Let’s run through ‘em below.

Animal Juiced Aminos contains a scientifically tested 2:1:1 ratio of BCAA in instantized form. What does instantized mean? It means that the BCAA in Juiced Aminos are able to quickly disperse in water and not clump up. Juiced Aminos can be quickly mixed up in a shaker cup or even with a just a spoon and water. And BCAA are as tried and true as it gets when it comes to aminos. They have both anabolic and anti-catabolic benefits. BCAA are anabolic because of their ability to significantly increase protein synthesis, support hormones such as growth hormone, IGF-1 and insulin, and also help to maintain a favorable testosterone to cortisol ratio.* On the anti-catabolic side, BCAA can help prevent protein breakdown and muscle loss. Bodybuilders and athletes because of the fact that they train hard and often follow strict dieting protocols, have a great need for supplement with BCAA. The three amino acids that constitute the BCAA are Leucine, Isoleucine and Valine. Led by Leucine, the trigger of the anabolic drive, this trio of protein building blocks is proven to build muscle, maintain lean mass when in a caloric deficit, improve endurance and boost recovery—properties absolutely vital to dedicated physique artists of all levels of experience.

Next up in Juiced Aminos are the additional essential amino acids (EAA). The BCAA make up three of the naturally occurring EAA, but with Juiced Aminos, you get a full, comprehensive EAA profile. It’s designed to deliver the correct ratios of key essential amino acids required for igniting the anabolic drive via increased muscle protein synthesis and decreased muscle protein breakdown. Research suggests that following resistance exercise, only EAA are needed to spark protein synthesis as the non-essential amino acids (NEAA) are not required. What makes Juiced Aminos superior to other amino products is that it contains the right forms of EAA. By using only special free form EAA, Juiced Aminos delivers those critical aminos fast to your muscles.

That covers the EAA and BCAA. But Juiced Aminos doesn’t stop there. This powerful formula is rounded out by a mixture of additional performance and recovery-based amino acids, called the Juiced AA Performance Blend. These ergogenic amino acids, along with the BCAA and EAA, help to not only maximize gym performance but also promote recovery at the same time.* Citrulline malate has been suggested to support plasma arginine levels and nitric oxide even more efficiently than arginine itself. The physiological effect of boosting NO as citrulline malate does, allows for better regulation of blood flow and amino acid delivery to muscle tissue, improved oxygen delivery, enhanced glucose uptake and muscle strength.* Citrulline malate also plays a role in reduced lactic acid and ammonia buildup, optimized ATP production, decreased muscle fatigue and helps promote endurance. At the forefront of essential amino acid research and development with the launch of Animal Nitro in 2004, Animal has been touting and standing behind the undeniable muscle-building benefits of EAAs for more than a decade.

A no-brainer addition to Animal Juiced Aminos was L-glutamine, the most abundant amino acid in the body. It comprises more than 60% of the free amino acid pool in skeletal muscle and greater than 20% of total circulating amino acids and is used not only by skeletal muscle but also the immune system and gut in order to maintain homeostasis. Strenuous exercise can deplete the body’s glutamine stores at a faster rate than they can be replenished, making it an important amino acid for athletes to consume. It’s especially important for assisting hard training athletes with reducing muscle soreness and rebuilding muscle tissue after intense training sessions. Glutamine also plays an important role in protein metabolism and cell volumization, both key for continued intense training sessions. Juiced Aminos also contains L-taurine, which is the second most abundant amino acid in muscle. L-taurine has the ability to expand muscle cells by helping the cell itself hold more water and and results in increased cell volumization. For bodybuilders and strength athletes, this is of utmost important as expanded muscle cells can boost hydration which results in a higher rate of protein synthesis.

Rounding out the Juiced AA Performance Blend are four key patented aminos; AgmaPure™ GlycoCarn®, ArginoCarn® and Sustamine™. Kicking things off, AgmaPure™ agmatine sulfate is a unique amino acid in that it helps improve nutrient partitioning leading to greater glycogen storage and increased water retention within the muscle. It also helps boost nitric oxide (NO), which can leads to great pumps during the workout.*

The second patented ingredient, GlycoCarn® is a powerful, research-backed form of carnitine made up of glycine propionyl L-carnitine HCl. Ongoing research indicates that, along with its ability to be a nitric oxide booster, this compound may be associated with improved high intensity exercise performance.* The performance effects of GlycoCarn® may be a result of both its nitric oxide boosting properties, as well as its antioxidant activity, ultimately leading to increased blood flow and enhanced ATP energy production. In addition, L-carnitine has been shown to increase hormonal responses to resistance exercise and recovery and resulted in a greater number of intact receptors for hormonal interactions.

The third patented nutrient, ArginoCarn® is another research-backed form of carnitine. ArginoCarn® is made up of acetyl-L-carnitine arginate dichloride. Research shows that this powerful compound helps increase growth & repair of neurons, supports brain-to-muscle connection, boosts cognitive function and memory and can even enhance fat burning during calorie restriction via increased mitochondrial use of fatty acids. ArginoCarn® provides a boost in increased blood flow, performance and muscle recovery assistance, heightened stamina, amongst a number of other additional benefits.* It helps both in and out of the gym.

Initially available in Orange Juiced and Grape Juiced flavors, Animal Juiced Aminos is a versatile powder that can be used pre-, intra-, post- or even sipped on over the course of the day allowing for the steady intake of critical anabolic nutrients. This steady stream of high octane, juiced-up aminos coursing through your veins is sure to support the most rigorous, balls-out battles with the iron… Which has been the Animal mission statement since day one—to supply the hardest-training strength athletes in the world with the tools they demand to reach their goals. The latest in a long and storied lineage of dead serious bodybuilding products, each geared-up scoop of Animal Juiced Aminos lives up to that heritage of hardcore.

Mix one scoop of Animal Juiced Aminos in 10 oz. of your beverage of choice before, during or after the workout. For best results, consume at least 2 servings per day. 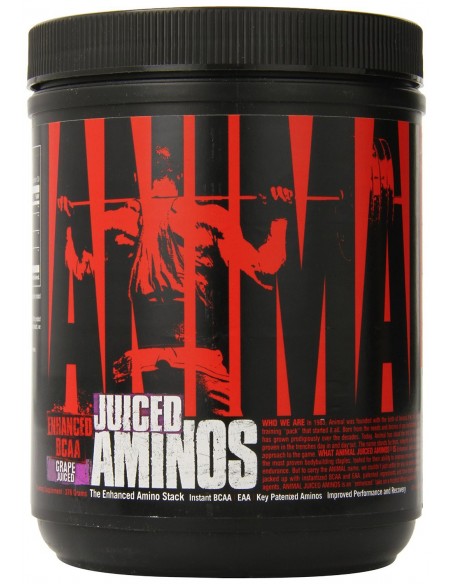 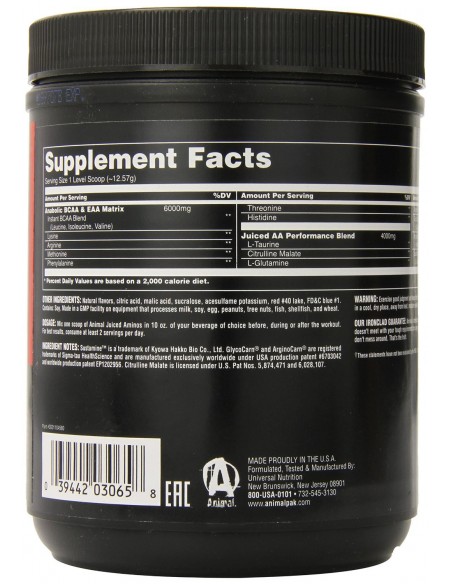 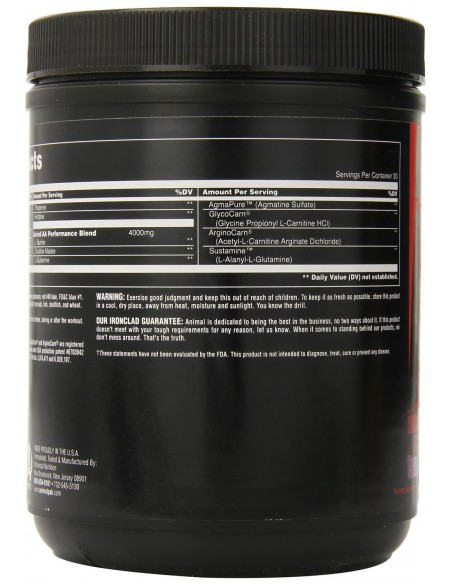