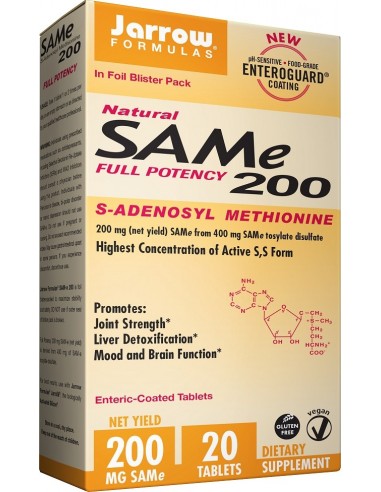 Found in all living cells, SAMe is a metabolite of methionine (an essential amino acid). SAMe is a chiral molecule and consists of two forms: (S,S) SAMe and (R,S) SAMe. The biologically active form is the (S,S) structure, while the (R,S) structure is biologically inactive. Jarrow Formulas SAMe is made naturally by microbiological fermentation and then specially processed without chemical solvents to preserve 68-80% (S,S) SAMe, the highest active level available.

SAMe has been clinically shown to have the following benefits:

SAMe methylation reactions are involved in the synthesis of neurotransmitters such as L-DOPA, dopamine and related hormones, serotonin, epinephrine and phosphatidylcholine (a component of lecithin).

SAMemetabolism supports the synthesis of glutathione (GSH) and glutathione-dependent enzymes (glutathione peroxidase, glutathione reductase and glutathione-S-transferase), which are components of the body's endogenous antioxidant network and important for liver function, including phase II detoxification.

Jarrow Formulas SAMe 200 is foil blister-packed to maximize stability and safety. DO NOT use if outer seal of blister pack is broken. 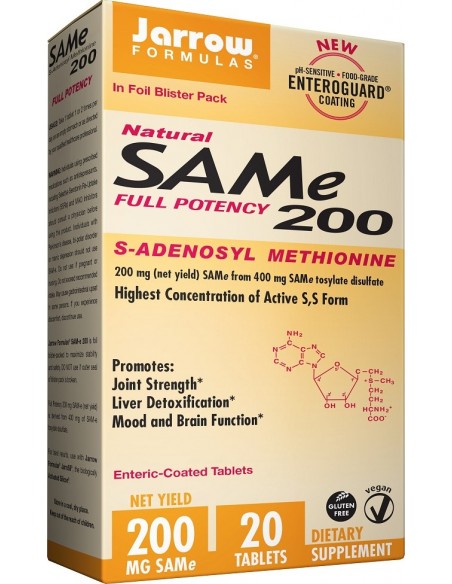