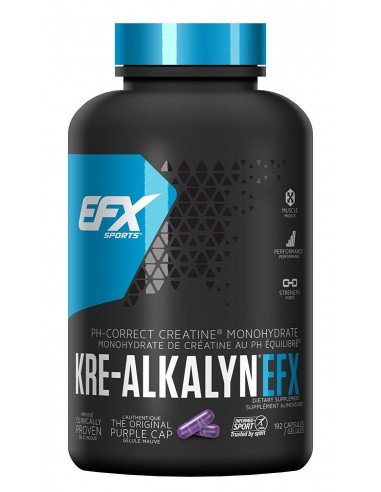 Kre-Alkalyn EFX It is the only product of creatine in the world with a pH above 12 because its molecules are chemically linked with agents "shock absorbers" using a patented production process.

Kre-Alkalyn EFX It is the only product of creatine in the world with a pH above 12 because its molecules are chemically linked with agents "shock absorbers" using a patented production process.

When the bodybuilders do not get results wishing to creatine, is when "they make the change" to Kre-Alkalyn EFX: the ORIGINAL patented brand.

So... are you ready to put an end to side effects and the poor performance of old-school technology. would you like to have the body with fluid retention?

To us also and that's why we use the Original:!Kre-Alkalyn EFX!

Kre-Alkalyn EFX It is a "shock absorber" of creatine that does not convert it into creatinine before reaching the muscle tissue of the body.

The research supported by the patent of Kre-Alkalyn EFX He showed that the rate of conversion of creatine into creatinine (the most widely used derivative) is directly related to its pH. It is the lower the pH, the faster is the conversion. What's more, conversion rates dramatically relentizaron when increased creatine pH above 7... and it stopped completely above pH 12.

This is because a pH higher than 12 level represents the perfect ratio of hydrogen ions in hydroxyl ions that stop the chemical reaction of:

Shock absorbers agents of Kre-Alkalyn EFX "absorb" effectively the excess hydrogen ions and prevent them from a decrease in pH. In other words, they give the creatine the ability to resist changes in pH that normally does not occur. This protects the creatine molecules during transport... giving them intact into the bloodstream and thus these can become your muscle cells with 100% power. This is the power of the pHCD technology!

As a dietary supplement, take 2 capsules a day, or one hour before exercising.