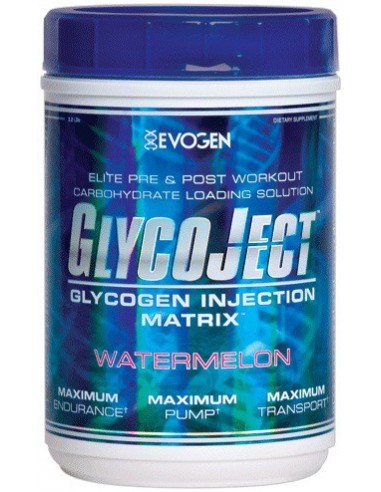 GlycoJect by Evogen is a supplement designed for post-workout recovery, based on carbohydrates and citrulline to restore glycogen.

HOW DOES GLYCOJECT WORK?
GlycoJect's customized carb component has been shown to absorb up to 80% faster than dextrose, maltodextrin, waxy maize or other "fast-absorbing" carbohydrate sources—even faster than plain old pasta, rice or breads. The rapid transport of this unique polysaccharide acts like a pump, driving water, carbs and nutrients into the muscles. To facilitate this glycogen and nutrient "injection" effect, GlycoJect's Hyper-Volumizing Rapid Absorption Proprietary Complex harnesses the natural power of this customized carb combined with nitric oxide and insulinogenics to accelerate the uptake of nutrients into muscles.

WHO WILL BENEFIT FROM GLYCOJECT?
All Bodybuilders - Off-season bulking or trying to build up lagging body parts (men and women); Carbing up for your show. Endurance Athletes - CrossFit, MMA, Jiu-Jitsu, Triathletes, Cyclists, Marathon runners, Wrestlers, etc. GlycoJect has seen a huge spike in interest in a very short amount of time without direct marketing to these sports.

HOW DO I USE GLYCOJECT?
GlycoJect is designed to be used before, during, and immediately after training, to help maximize endurance, pump, and nutrient transport.