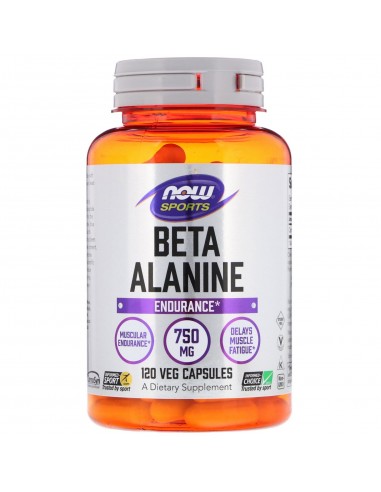 Another captivating advantage for any athlete is the "Informed Sport" anti-doping certificate available with this NOW Foods product, which is by far one of the most comprehensive and tightly controlled.

What is beta alanine and how does it work?

Beta Alanine is not found in our food, but is a breakdown product of our metabolism. However, together with the amino acid histidine it forms the buffer substance carnosine. Limiting for the formation of carnosine is beta alain and can therefore be increased by up to 40-80% by the supply of beta alanine.

What does carnosine do?

Carnosine itself is found almost exclusively in meat. Carnosine shows high antioxidant properties and this substance plays a particularly important role as an intracellular buffer substance for acids (hyperacidity). It accounts for about 10 er capacity, but can itself be increased by 40-80 by supplementation with beta alanine.

Evidence for performance improvements in studies show especially with:

Taking beta alanine increases blood concentrations, although at up to 800mg or 10mg/kg body weight per intake, there are only small increases and side effects are extremely rare. This is also the reason for the 750mg dosage in the Beta Alanine capsules from NOW Foods.

Known side effects are tingling, hot flashes and sensitivity disorders from dosages of over 800mg per intake, although these symptoms can vary greatly in severity.

Due to the possible side effects, a maximum dosage of 1 beta alanine capsule per intake is ideal./li